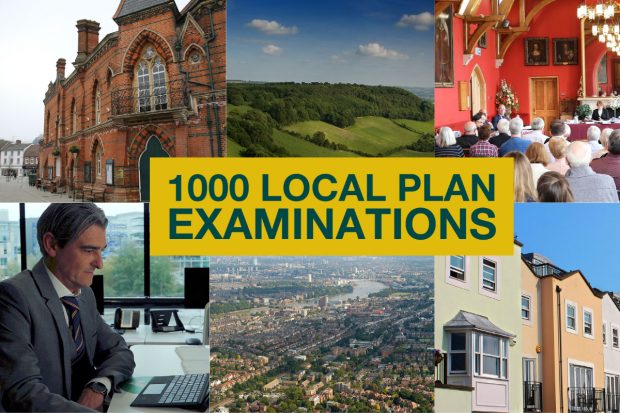 Jerry Youle, Professional Lead for Local Plans, explains the role of local plans. He shares an insight into the work that goes into this vital aspect of the planning system, and celebrates a big milestone: the 1000th local plan submitted to the Planning Inspectorate.

The last major reform of the planning system was back in 2004.  We are now examining our 1000th plan submitted under this ‘new regime’. That feels like quite an achievement and, as we stand on the edge of a reformed planning system, it’s a good time to take stock.

Local plans are complex, contentious and hotly contested, like many things in planning.  They deal with big things – new towns and what happens to the green belt, for example. If you add up the housing in all the adopted plans in England, it comes to around 3.7 million new houses. These plans affect millions of pounds worth of investment and they were all examined by the Planning Inspectorate.

Inspectors have to assess whether plans are ‘sound’ (positively prepared, justified, effective and consistent with national policy) and then, if not, to recommend changes to make them so. This involves making some tough calls. In doing so, inspectors listen to the voices of councils, communities, developers, interest groups, government agencies and many more.  Everyone has a view on planning. Collectively then, inspectors have allowed the good, prevented the worst and helped the acceptable over the bar.

To do this work inspectors need to be able to get to the heart of complex issues quickly, understanding the competing arguments on housing land supply, sustainability, biodiversity, viability, infrastructure and much more. In doing so they always aim to act in a way which is open, fair and impartial.

Local plan examinations can be long, partly because they are dealing with large and complex issues but also because the inspector is required to help make plans sound. This can involve the local planning authority preparing new evidence and changes to the plan and then consultation.  Inspectors therefore need tenacity, staying power and good project management skills.

Overall, we think a rather magnificent 166 inspectors have examined a local plan since 2004. We would like to express our thanks to all these inspectors and to everyone else in the Inspectorate who has helped along the way. Not to mention the programme officers, consultants, lawyers, site promoters, interest groups, parish councils, the public and many more, all of whom have played a vital part – and, of course the councils who prepare these complex and important things in the first place.

Local plans are just one part of our planning system, at best working seamlessly with the world of planning applications and appeals. So, from Barrow to Basildon, via Birmingham, Barnsley, Bournemouth, Bristol and Burnley – and everywhere else between and beyond - it has been something of a ride. And where has the honour of being number 1000? It’s the joint local plan for Babergh and Mid Suffolk.

As things stand now, government is working hard to develop the new planning system following the recent white paper – Planning for the Future. We have seconded some of our inspectors to help with this work and we stand ready to play our role as the new system comes into being.

This blog helps customers understand the role of the Planning Inspectorate in the planning system, and shares insights about our work.